Santa Cruz and the Island dress up in fantasy with the arrival of Carnival, which will fill the streets of the capital, day and night, with rhythm, colour and fiesta.
Carnival brings a new date of rhythm, colour, and ultimately, the unique flavour of a festival that is born in the heart of Santa Cruz de Tenerife and is exported to people all over the world, who watch in amazement the non-stop list of shows that carry on one after the other from early February.
Election galas for the child, adult and senior citizen Queens, the children's and adult murgas" contests, the carnival krewes "and musical bands" Contests, band festivals and rondalla or carnival band events, street performances by orchestras and Carnival groups.
The Fiesta begins for real in the street with the celebration of the Grand Opening Parade to start the ball rolling.

Carnival is celebrated in every town and village on the island, but the most spectacular carnival celebrations are to be found in Santa Cruz de Tenerife and Puerto de la Cruz.
The Santa Cruz festivities are almost the island carnival as it attracts so many people from all over the island. There is a very complete programme of activities drawn up by the fiestas committee of each town council.
Carnival is celebrated in the street. Plaza de España, in Santa Cruz de Tenerife, is decorated and many different kinds of stalls and kiosks are set up, giving the area music and a festive atmosphere. Once elections have been held for Carnival Queen, her Court and the Junior Carnival Queen, a parade is organised to announce the beginning of Carnival.
The following week is a busy one filled with competitions between different kinds of Carnival groups, bands and dance schools: murgas, rondallas, comparsas, fancy dress competitions and a parade of antique cars. Carnival reaches a climax on carnival Tuesday , with the "coso" (a parade that starts in the afternoon, early evening).
The burial of the sardine is another ritual that is carried out in all the places we have mentioned, although the "burials" held in Los Realejos, La Orotava and Puerto de la Cruz are the best. The sardine is made from rags and cloths. In Santa Cruz de Tenerife, an enormous sardine sitting on a throne is carried through the streets on a float, followed by an entourage of mourners, pregnant men and widows in floods of tears and general hysteria.
The festivities end on the Saturday and Sunday after Carnival Tuesday, with the "Piñata Chica" and all its shows, street parties, parades and exhibitions. 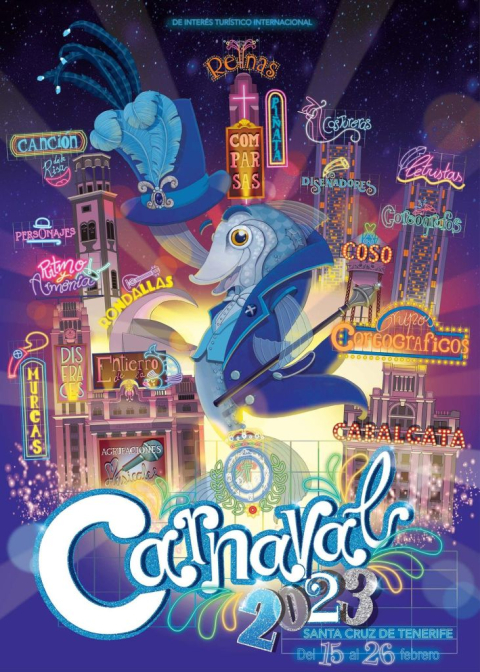