Even before the Canary Islands were part of history as such, they were legendary as the mythical lands beyond the Pillars of Hercules, the Gibraltar Straits, toward the Dark Sea. Paradise, the Elysian Fields or the Garden of the Hesperides are often placed here by Classical authors. One of the first reliable reports of the islands comes from Pliny who, in the 1st century, spoke of an expedition sent by Juba, King of Mauritania, which brought back giant dogs as a souvenir of the adventure. This is the origin of the name of the islands: Canary Islands, from can or canes. Magnificent examples of these fierce-looking native hunting dogs can still be found in the islands, where they are called "verdinos" on some islands and "bardinos" on others. It is hardly surprising that the first legendary and historic accounts of the Canary Islands almost always mention Tenerife, also known as Nivaria, as the sight of an enormous snow-capped mountain, sticking up above the clouds at those latitudes and visible for miles around must have made quite an impression on those ancient seafarers.

Up until the conquest of the Islands by Europeans, which took most of the 15th century, they were inhabited by people, possibly of North African origin. The Guanches - pre-Hispanic inhabitants of Tenerife - dressed in rough skins and there is no evidence to suggest they knew anything about sailing. They did, however, bury their dead with great care after mummifying them, often using highly efficient techniques for this, and they showed fine taste in their decorations. They worked in clay, although they did not use a wheel, and their spears (añepas) where tipped with sharp pointed heads of natural volcanic stone. Many ancient writers - and some modern ones too - thought that the Canary Islands were the visible remains of a sunken continent: Atlantis, and that the Guanches were the descendants of Atlas. They would be the sons and grandsons of the people who inhabited the mountains of that legendary world who were transformed suddenly into islanders by the catastrophe. The theory, although totally lacking in a scientific base, is supported by some based on the fact that the Guanches were not a seafaring people and that there was no communication between the islands, although they were clearly visible. These arguments also mention the enormous stature of the natives - if we are to give credit to some reports, giants were commonplace on the islands. 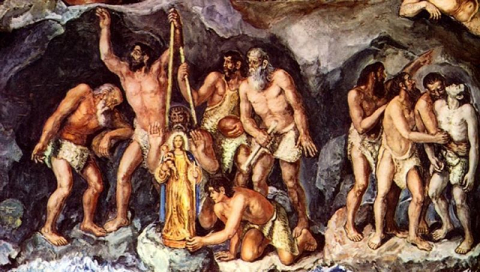 Apparition of the Virgin to the Guanches
©2022 Wonderful Tenerife. Todos los derechos reservados.