Dikes: general appearance
Dikes usually appear in cracks within ravines and take the form of a vertical section of dense rock. Their thickness normally ranges from 0.5 m to 2 m.

Dike emerging from a cliff 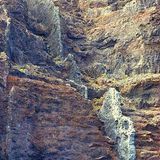 The eroded sides of a dike reveal that it is a large, flat, vertical structure that has been injected into pre-existing material. 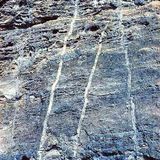 The appearance of the dikes as they traverse a large cliff face means they are popularly known as "cliff veins". Acantilado de los Gigantes, Tenerife.

Dikes on the seabed 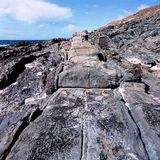 In horizontal cracks such as those found on the seabed, dikes can also appear as a horizontally-extending section of rock. Basal complex, Fuerteventura.

Dike emerging from the seabed

The density of the rock causes it to stand out of the seabed, as it is more resistant to the erosive power of the waves. 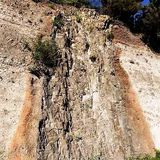 Dikes trace the routes taken by the lava as it ascended prior to eruption. The heat alters the material enclosing these routes, in this instance causing them to turn red following their contact with the dike.

After the eruption has ended, the crack remains full of magma, which slowly cools to form the compacted rock of the dike. The cooling process is quicker on the two sides that are in contact with the material enclosing the dike. The thicker the dike, the greater the potential difference between its centre and sides.

Dike: diagram of a fissure eruption 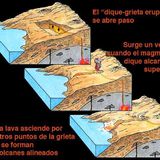 In basalt eruptions, which are the most common kind in the Canary Islands, the magma is injected into cracks that are then extended by the pressure of the lava until they reach the surface and an eruption occurs. The spreading of the crack can also generate new eruptive outlets that are in line with the original one.

The connection between dikes and lava 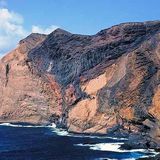 The fact that dikes are conduits for the emission of lava is clearly demonstrated in this crack on the islet of Montaña Clara in Lanzarote (see photo diagram).

Diagram of the connection between dikes and lava 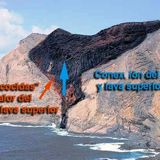 The islet of Montaña Clara effectively comprises a single volcano, cut off by the sea, and we can clearly see the conduit (the dike) that fed the upper mass of lava. 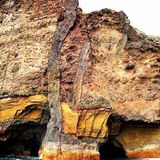 This cliff face has several faults (fractures in which each section has been displaced relative to the other) that divided a pre-existing dike. The intact dike that traverses the cliff face in its entirety occurred after the faults had appeared.

Although these faults only caused a slip of a few metres, it was enough to leave the three dike fragments slightly separated from one another. 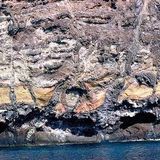 As they are injected into and traverse soft materials, like this yellow layer of tephra, dikes can expand out to the sides, as scattered tephra is partially compressible. See how the rock has been altered and reddened around the "pleats". Acantilado de Los Gigantes, Tenerife (see photo diagram).

The diagram highlights two "pleats" surrounded by rock that has been reddened due to the heat of the dike. 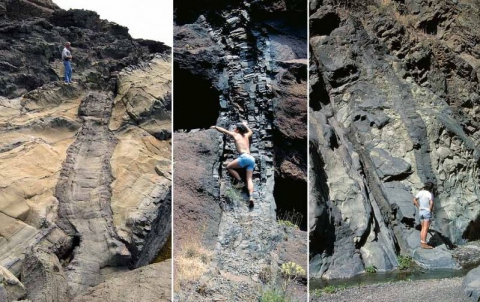