Traditional and native Canary Island sports and games have become very popular in recent years, through federations, associations and groups. They are also supported by the Tenerife Island Cabildo (government), through its programme "Tenerife and our way of life" and the Native Sports School, with a workshop organisation carrying out promotion campaigns on the beaches of the island. Canary Island wrestling has Guanche origins and enjoys firm support from the people of Tenerife. The fixture list covers the whole year. Almost every borough has its own "terrero" or wrestling ring.

Each bout - or "brega" is between two contestants who try to unbalance each other with spectacular trips and throws. The two wrestlers have to remain on their feet, as, if any other part of the body touches the ground, that wrestler is eliminated. This is a regulated sport that is also practised in Venezuela and Cuba; a legacy of Canary Island migration.

Staff fighting in the Canary Islands consists of a friendly confrontation between two contestants with staves. It is similar to fencing, though they always try to avoid hurting their opponent. The attacker - "mandado" - tries to touch his adversary on the parts of his body he leaves uncovered, without any full contact.

The defender - "atajiado" - tries to defend himself.

The origins of this sport are the staff fights and games of the original Guanche population of the Islands, which have been passed on from teacher to pupil over the years, until modern times.

There are other country sports practised on the Island, such as lifting stones, oxen pulling sleds, this latter sport is becoming increasingly popular. There is a championship organised by the Canary Island Association. There is usually an exhibition of rural sports held every April in Tegueste.

Canary Island boules is another sport, similar to petanque. It origins are thought to be Venezuelan, where it is called "bochas" or "Creole boules".

Canary Island Association of "Arrastre" (Oxen pulling sleds) and other native sports
C/ Amanecer, 45 - La Laguna
Tel 922 264 402
Fax 922 630 732
Sports: cattle pulling sleds, handball, lifting and throwing stones, lifting ploughs, shepherds leap (pole vaulting up and down mountain sides) "calabazo" (a pole with a gourd on the end, used for transferring water from one tank to another) 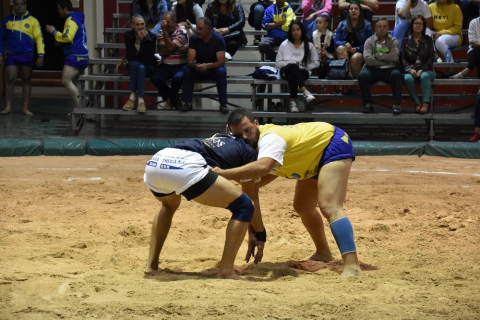