This is the main tourist centre of the north of the Island, situated on the coast of the Orotava valley, at the foot of Mount Teide. It enjoys a mild climate throughout the year. It was the pioneer of the tourist industry, and the oldest holiday resort in the Canary Islands, being declared "of Tourist Interest" in 1955. It is a cosmopolitan town with splendid sea-side facilities like the Costa de Martiánez complex of swimming pools, with its enormous artificial lake and where the luxurious Puerto de la Cruz Casino is located . This was the work of Cesar Manrique, an internationally famous artist from Lanzarote.

Modern, top class hotels equipped with all the comforts you could want, and a large selection of self-catering accommodation, where you can find typical international restaurants that specialise in regional cuisine, night-clubs, cafes and all kinds of entertainment.

Puerto de la Cruz, colourful and picturesque, is unusually attractive, with spots like San Telmo, Plaza del Charco, the fishing docks and the whole La Ranilla district, San Amaro and La Paz, the Taoro Park and the Botanical Gardens, created in 1788, that has a collection of plants and trees from the five continents. There are several churches worth visiting, like the church of Nuestra Señora de la Peña de Francia, the Castle of San Felipe and the Customs House. The town has libraries, convention center, theatre, post office, sports centre, Olympic swimming pool, a large number of tennis courts and gymnasiums. There are also facilities for a wide range of water sports.

Puerto de la Cruz is the starting point for excursions to the rest of the Island with travel agencies, taxis or hire cars.

TF-312 via El Botánico and via Las Arenas is the road link to the Northern Motorway TF-5.

The town is also the starting point and destination of many different bus routes that link it with the rest of the Island and Santa Cruz, 37 kilometres away.

The most famous festivities are the Carnival fiestas, in winter, and the Fiestas of the Patron Saint, in July.

Loro Parque is a genuine twelve hectare paradise housing the largest parrot collection in the world.

Loro Parque also has the largest dophinarium in Europe, an orchid house, an African market, tiger island, lorovision, etc. The facilities have recently been extended to include a new show, Orca Ocean, a sea-lion show, a Thai village, a subterranean aquarium with a submarine tunnel, a shark pool, gorillas, water falls, etc.

Puerto de la Cruz also has one of the most prestigious casinos in Spain, the Puerto de la Cruz Casino, set in the Martianez complex. From the Taoro park, you can enjoy a beautiful panoramic view of the town and of the Orotava Valley.

There are different religious services every Sunday; times are announced on church doors.

A kilometre of coastline has recently been regenerated, from Castle San Felipe to Punta Brava. Some 200,000 cubic metres of volcanic sand from the sea bed nearby have been used for this. The beach is called Playa Jardin and includes 17,000 square metres of gardens. The project was designed by the brilliant artist from Lanzarote, Cesar Manrique. 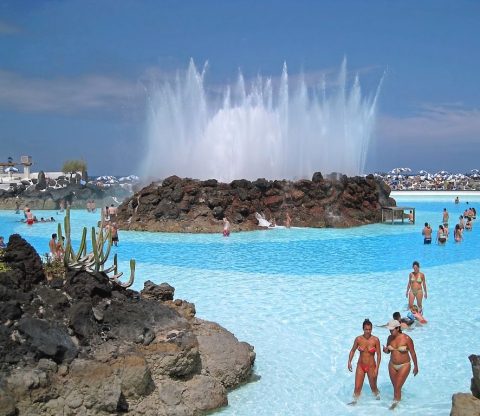