This popular festivity has been declared of national tourist interest. The first popular pilgrimage to San Isidro took place in Los Realejos in 1676.

It is an offering made by the people of the countryside to their Patron Saint. The floats that take part in the procession are no longer drawn by oxen, they are built on lorries, making the parade along the steep streets a lot easier.

After the religious service in honour of San Isidro, the floats are paraded. These are bedecked with plants, branches, flowers, farming equipment and the head of a pig that has been sacrificed for the fiesta.

Each float is a farming allegory, each one representing a street, or district. The people on the floats, in traditional dress, throw "papas arrugadas" - small potatoes boiled in their jackets -, pop corn, "gofio" - toasted corn or wheat flour, wine, etc to the crowd.

Balconies and windows are decorated with the typical attire of the island. There is also a livestock exhibition displaying all the best animals of the area. Wine bars offer free wine to spectators and participants alike.

The town council sets up typical stalls, where you can try sardines and potatoes.

The festivities, which have to be experienced rather than just watched, have been declared a tourist event. 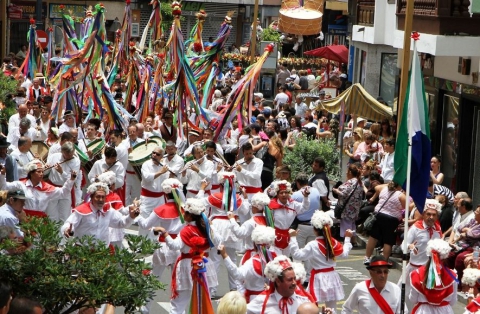