MUSEUM OF NATURE AND ARCHAEOLOGY (MUNA) 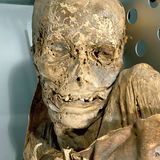 Biodiversity in the Canary Islands, and the abundance of remains from an extinct culture meant that the islands were considered outstanding laboratories for investigating man and nature by the many scientists (including Darwin, Humboldt, Verneau, Lyell, Webb and Berthelot) who visited the islands in the 18th and 19th centuries. This interest generated an increasing stock of archaeological, bio-anthropologic and naturalist assets in a range of both public and private collections, which created the foundations on which the Tenerife Cabildo, or island government, created the Tenerife Museum of Natural Sciences and the Tenerife Archaeology Museum in the 1950s. In the end, these two museums have been merged together with the Canary Island Institute of Bio-anthropology, to create the modern Museum of Nature and Archaeology, providing visitors with all the potential of the contents, collections and knowledge accumulated over decades of research and scientific work, offering a stringently scientific and user-friendly view of the natural wealth of the Canary Islands and their pre-Hispanic populations. The Museum of Nature and Archaeology is located in the former Civil Hospital, a leading example of the neo-classical architecture of the islands, and probably the masterpiece of architect Oráa. A visit to the permanent exhibition starts on the Ground Floor, with the "Origins and Nature of the Canary Island Archipelago". Modern audio-visual techniques are used to display different aspects of the natural environment of the islands: their geological origin and evolution, volcanic and meteorological phenomena that have forged the landscape and an interesting insight into Canary Island ecosystems and their rich biodiversity. The route starts with an Introduction room (Floor 1), which deals with the islands as ideal laboratories for studying culture and the natural environment. One can then choose to visit the Natural Sciences ring or the Archaeology ring. The former includes rooms devoted to "Botany", "Terrestrial invertebrates" and "Terrestrial vertebrates", while the symmetric Archaeology ring includes the following rooms: "Collections" and "Archaeology of Tenerife".One then goes up to Floor 2 of the museum, where a more traditional form of museum exhibition is used, although it is still surprising. The route starts in an introduction room entitled "The Canary Islands down the Ages", with contents that range from the first reports of the islands in ancient times, to the present day. In the Archaeology ring, one finds the thematic units "Collections", with pre-Columbine art and African ethnography, reflecting the cultural diversity of Africa and the pre-Hispanic cultures of Central and South America, "The Pre-History of the Canary Islands", where the life style of the ancient settlers of the Canary Islands is explained, and "Human Bio-Anthropology", the contents of which includes impressive Guanche mommies. If you choose the Natural Sciences circuit, you will find rooms devoted to "Fossils, Minerals and Rocks", with whimsical examples of the Mineral Kingdom, and "Marine Biology", where visitors are submerged in the beauty and natural wealth of the marine environment of the islands, with spectacular specimens and life-size replicas of whales, turtles, etc. made in the museums own taxidermy workshops. 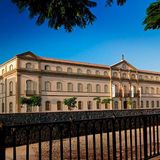 The teaching activities of the Museum play an important role. The Museum has a Class Room with a range of materials for activities and where a range of workshops are organised. It also has material for lending out and it organises a monthly programme of activities like nature routes, talks, screenings, chats, courses, etc. Information can be obtained and bookings made at the following telephone number: 922 535 128. Descriptions of exhibits are available in English, German and French for foreign visitors, to be found at the beginning and end of each thematic area. There are also guided tours available and the museum is accessible to the handicapped, who can use the lifts, telephones and toilets. Furthermore, there is a multi-purpose hall for up to 45 people, a shop offering books and a wide range of souvenirs and gifts, a documentation centre and specialist library and a cafeteria around two of the lovely courtyards.

C/ Jose Murphy, 12 (Plaza del Principe)
Santa Cruz de Tenerife
Tel: 922 24 43 58
Fax: 922 27 44 17
Opening Times: from Tuesday to Friday, from 10:00 to 20:00 hSaturday and Sunday from 10:00 to 15:00 h (Monday closed).
This museum consists of fourteen rooms and the collection is made up mainly of paintings, although there are also exhibits of sculptures and of the lesser arts. It has both its own pieces and a deposit of the works of the Prado Museum in Madrid from the 17th, 18th and 19th centuries. The best works include:
"San Jose", by Ribera
"Portrait of Isabel II", by Federico de Madrazo
"Portrait of Fernando Viscaí", by Joaquin Sorolla
the "Triptico de Nava", of the 16th century Flemish school, the central part of which is by Peter Coeck, recently restored by the Spanish Institute of Historic Heritage.
The museum also has a wide sample of the best Canary Island painters as part of its permanent collection, with works by Gaspar de Quevedo, Cristobal Hernandez de Quintana, Juan de Miranda, Gonzalez Mendez, Valentin Sanz, Bonnin, Sureda, Alfaro, Guezala, Pedro Gonzalez and Oscar Dominguez, among others.

C/ San Isidro,1 (Castillo de Almeida)
Santa Cruz de Tenerife
Tel.: 922 845 734 - Fax: 922 24 95 04
Opening Times: Monday to Friday from 9:00 am to 2:00 pm(Free admission)
Important: Take your I.D. card with
This museum was founded in 1988, in the Almeida Castle and it has become one of the best research centres for historic cartography of the Canary Islands. The ample collection of weapons and other military objects, includes a large area devoted to Nelson´s failed invasion of Santa Cruz on the 25th of July 1797. In the exhibition that explains the events of this attack, one can see the famous Tiger cannon that, according to tradition, injured Nelson, causing the amputation of his right arm, along with uniforms and personal belongings of leading military figures and models of old military constructions. The main hall contains a display of flags left behind by the troops of Horatio Nelson and the Canary Island militia flags. The museum also exhibits collections of the old weapons used by Guanches and Spaniards in the battles of the Conquest of Tenerife that were fought in the late 15th century, and oil paintings and water colours by famous Canary Island painters. 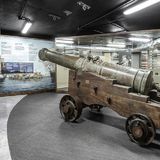 The "Castillo de San Cristóbal" Visitor's Centre, managed by the Independent Board of Museums and Centres of the Island Council of Tenerife, is an interactive facility enabling visitors to discover and investigate the remains of the walls of the Castle of San Cristóbal and find out more about the history and defence system of the Island.
In June 2006, while renovation work was being carried out on the Plaza de España, the remains of what was once the Castle of San Cristóbal were discovered. In light of the historical significance of the discovery, it was decided to protect and value this resource by incorporating an underground visitor gallery into the original project by Swiss architects Herzog & de Meuron.
The Centre explains Tenerife's past defence system, with a tour of the castles of Santa Cruz, such as San Cristóbal, San Juan or Paso Alto, as well as of those located on the rest of the Island, some of which are still standing today, such as that of San Felipe in Puerto de la Cruz or that of San Miguel in Garachico. The exhibition project, developed by the Tenerife Museum of History and Anthropology, is rounded off with a monographic explanation devoted to the Castle of San Cristóbal, from its construction in 1575 to its demolition in 1928. The outline of its silhouette, projected against the lake, had until now only been remembered in the name of the popular Calle Castillo (Castle Street), but it is entering the present and it seems that it is once again claiming its place in the history of the city.
From 25 July 2009, the "Castillo de San Cristóbal" Visitor's Centre has an added attraction: the legendary "El Tigre" cannon will be on display for the enjoyment of the public and local and foreign visitors alike. It is an 18th Century bronze cannon, cast in Seville, around 3 m long and weighing 2,000 kg. In order to enhance this historic building, the symbolic "El Tigre" cannon was transferred from the Military History Museum of The Canary Islands to the Visitor's Centre, to be displayed in a room specifically prepared for this purpose.
This new temporary location is ideal for the emblematic cannon, not only because it is an exceptional piece to demonstrate the centre's exhibition, but also because it places the cannon back in a location near to where, on the night of 24 July 1797, British aspirations to seize power of such a valuable strategic location were thwarted, converting the city of Santa Cruz into the legal and administrative centre of Tenerife and, by extension, of the Canary Islands.
Although it cannot be historically demonstrated, legend has it that it was "El Tigre" that wounded the famous English admiral Horatio Nelson, by blowing off his arm. As a symbol of this feat, "El Tigre" lives on in the memory of Tenerife. It has been named, reproduced and imagined since then and, over time, has remained as one of the most powerful metaphors and allegories of the value and feelings of the people of Tenerife.
Castillo de San Cristóbal
Plaza de España, s/n
38001 Santa Cruz de Tenerife
Tel: (+34) 922 28 56 05
Opening hours from Monday to Saturday: from 10 am to 6 pm (free) 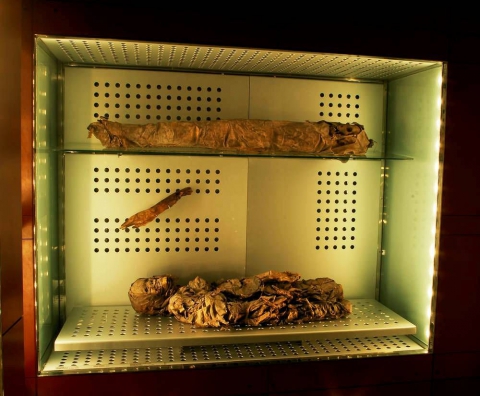