1 The track starts at the end of Donis Street, in the old Camino Real (Royal Road) from Icod to Guía de Isora, an unpaved road, with remnants of the original cobblestones, amid orchards, bushes, sticky brooms. It takes you to the lower part of Ruigómez or Camino de los Guanches (Guanches´road), twice crossing the C-820. Finally, you cross the road until you reach the Charcas de Erjos. The "Charcas de Erjos" or Erjos´s ponds are inland areas where you may find species from wetland areas such as grey herons and snipes. On the shores, reeds, cyperus and Canarian willow trees grow abundantly. The track goes down very close to these ponds, where the original cobblestones appear, and then starts going up towards the mountain-pass (puerto) of Erjos. Along the track you have orchards, sticky brooms, Canary Islands candle plants etc. At Puerto de Erjos (1117 m. high) you cross the C-820, and turn left into an unpaved path with remnants of the original cobblestones. Then go down through tree heaths towards Valle de Arriba. Take Calle Real (Royal Street), San Fernando, Reventon and afterwards Camino de los Arrastraderos, bordering Montaña del Guirre amid buglosses (Echium) and candle plants... to El Calvario where you keep to the right into the "malpais" (old volcanic soil) sprinkled with sticky brooms and tree heaths. Leave Montaña Bilma on the right. Keep going between walls and terraced fields of figtrees and vineyards towards the TF-2232 road. Go across the TF- 2232 and you will enter Las Manchas along a paved road. Past this settlement, you turn left into the path that goes up to Roque de Arguayo, from where, on clear days, you can admire nice views of La Gomera. 2 Go along this path until you get to Arguayo, the arrival point of the track.

This municipality stands just to the west of Garachico and it is, together with Vilaflor and Tegueste, one of the three municipalities in the island without a coastline. Its 23 square Km. consist of areas with traditional crops in the lower part and areas of pine forests up to the limits of the Teide National Park.

Rugged landscape with a very steep terrain. Growing of traditional crops, mainly cereals, which are no longer grown in any other part of the island. Geological interest Volcanic eruption of the Montaña Negra in 1706 which buried the above mentioned San Antonio Church, as well as the neighbouring village of Garachico.

San Antonio Church: rebuilt in 1728 after being destroyed by an eruption in 1706 from the Motaña Negra volcano, ceiling of Mudejar style. Image of the Virgin of "Del Buen Viaje". 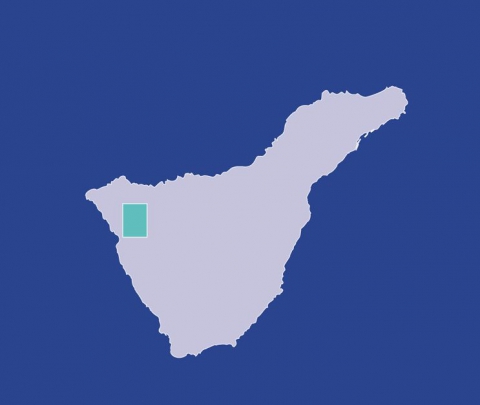