1 The path starts in San Juan del Reparo, along Calle El Monte, right after the crossroads, giving access to a narrow path that descends to the first turn off. Here, you turn left and then take the next turning to the right. The tar macadam surface of the road starts to disappear, revealing the cobbles of the old bridle path that zig-zags down the hill, offering some marvellous views of the town and the port of Garachico. Lava flows from the eruption of the Montaña Negra Volcano in 1706 are a typical feature of the natural landscape here. Another feature is the variety of vegetation, with the dominance of pines as the only species of trees, mixed with some rock species such as houseleeks, thowthistle, savory and some species of wax plant, without forgetting the constant presence of ferns and lichens. The trail gradually disappears on the outskirts of the village, where the first houses appear. From here, you can take the street that descends between traditional Canary Island buildings and some modern buildings, to the church of Santa Ana, the San Francisco park, the town hall and the Casa de piedra, all set in the La Libertad square.
2 The street on the left leads to Juan Gonzalez de la Torre square, where you will find the Puerto de Tierra and the end of the walk.

Much of the trail follows an old Bridle Path, which, in turn, follows the trajectory of the lava flows that descended from the crater of the Montaña Negra Volcano when it erupted in May 1706. The lava swept down the slopes to overwhelm the villages in its path, on its way down to the harbour, where it wiped out part of the town and reduced the size of the bay.

Los Reyes church (unaffected by the eruption of 1706). Puerto de Tierra (the remains of the harbour before the 1706 eruption). 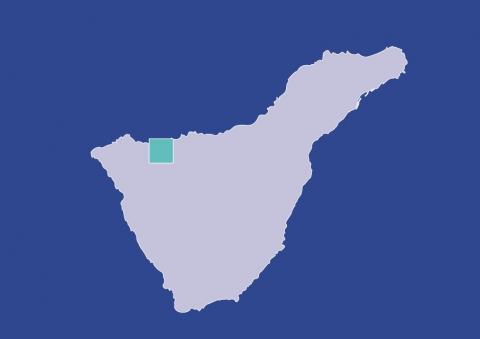