The church of Santa Ursula was built on an original early 16th century church. The Mudejar moulded ceiling over the chancel is outstanding. The main reredos, of the early colonial Baroque period is below, presided over by the Patron Saint, Nuestra Señora de la Encarnación, from the 16th century. The church holds some 17th century French tapestries from the "Royal Workshops of the Paris Gobelins" (later period) considered unique in the religious heritage of the Canary Islands; the late 16th century Renaissance reredos apparently belonged to the Candelaria parish church.

The church also holds the figure of Santa Ursula, made in the German style (17th century); a San Juan Bautista (Montañes School) and the oldest facsimile of La Virgen de Candelaria (16th century), a black virgin that is considered a copy of the original figure of the Patron Saint of the Canary Islands that disappeared in 1826 in a land slide. There is a text engraved on the neck, waist, sleeves and the lower part of the tunic of the figure that has been interpreted in different ways, related to Iberian and Etruscan characters.

The church also has a silver lamp and a large collection of paintings.

The Casa Fuerte Fortress is close to the church. The Los Ponte Family, Marquis of Adeje and Counts of La Gomera, were given authorisation on 2nd of May, 1555, to build a fortress/house. This was built by Pedro de Ponte in 1556 to defend his properties, which included an important sugar mill.

Parts of the Fortress House can still be seen. On several occasions, English corsair, John Hawkins, lived here. He was the partner of Pedro de Ponte in the slave trade with America. The last Lords of Adeje however, when they sold their properties here in the 19th century, took the contents of the mansion to Madrid. This included furniture, tapestries, arms, etc. 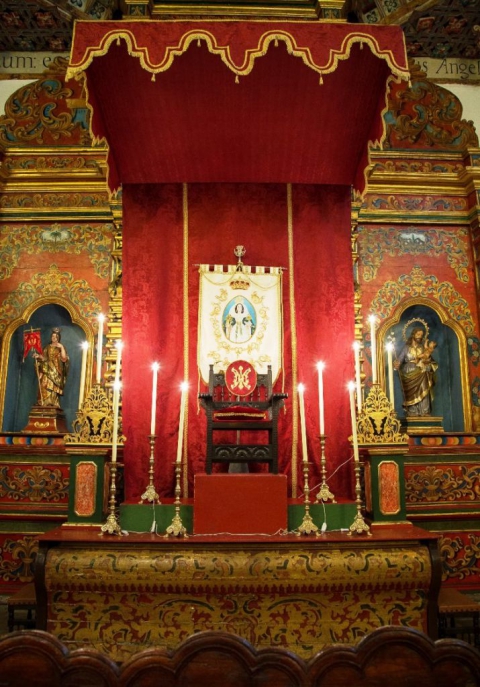