On the site where the final showdown took place (25th of December, 1495) between the Spanish army and the Guanches, who could no longer fight the advance of the Conquistadors, a church was built in 1537. Alonso Fernández de Lugo, after the battle was won, had promised to build a church to La Virgen de los Angeles on that very spot, and the village that grew up around it was to be called La Victoria. The church burned down in 1589. It was re-built, improved and extended in the 18th century, until it took on its present form.

It is said that the hundred-year-old pine tree next to the church witnessed the defeat of the Guanches and acted as a bell tower for the first mass held at the end of the battle.

The church has an interesting and profusely decorated Mudejar style moulded ceiling that is one of the best in the Canary Islands.

The present figure of Nuestra Señora de los Angeles belongs to the Italian School of the late 16th century. The church holds a 17th century San Matías, from Mainland Spain, a silver monstrance by Alonso Sosa (1748) and another one that was sent from Puebla de los Angeles (Mexico), made in 1739, a Processional Cross and an interesting painting by Gaspar de Quevedo. 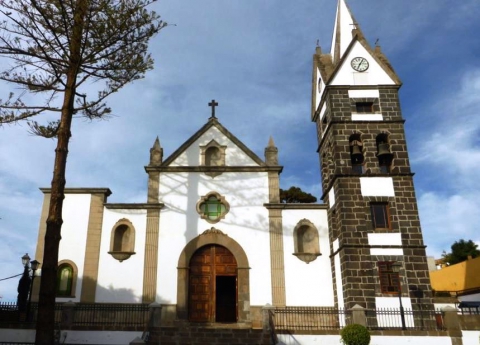