This house (1620) is the only remaining example of seventeenth-century civil architecture in the centre of Puerto de la Cruz.

Historical background of the surrounding area 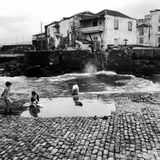 The immediate surroundings of Casa de la Aduana, originally known as Puerto de la Cruz de la Orotava, sprang up in the early sixteenth century as a point of departure for produce from La Orotava valley. The tiny Caleta del Charco (inlet) was used, not without some difficulty, as a wharf. Heavy seas in winter and treacherous access meant that vessels were forced to drop anchor some way off, and cargo was transported in small boats.
At that time, La Laguna was the island capital, and the authorities ordered the construction of a quay to facilitate operations.

Connections with the port 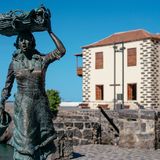 The Casa de la Aduana was erected in 1620 by the Franchy family, at a time when Puerto de la Cruz was beginning to attract a rich and powerful trading elite of mainly Portuguese, English, French and Catalan origin. Accordingly, the local oligarchy was very much interested in controlling the expansion process and especially the port which would be the main departure point for their products, in particular Malmsey wine.
In 1648, King Felipe IV issued a royal decree granting Puerto de la Cruz the title of “Key to the Island”, whose symbol figures on the heraldic shield.
The Casa de la Aduana was an architectural complex that included the Battery of St. Barbara, the former Royal Customs warehouse and the living quarters of the Prieto-Alfaro family, descendents of the Franchy family. The house was leased to the Treasury for use by the customs and as a residence for the administrators until 1833, when it passed to Santa Cruz de Tenerife.
In 1689, Puerto de la Cruz had 596 houses and a population of 2,605. It reached the height of its development in the latter part of the eighteenth century when the neighbouring port of Garachico was destroyed by the volcanic eruption of 1706.
Its cosmopolitan atmosphere did not go unnoticed and was much admired by Humboldt in 1799.
Puerto de la Cruz’ final moment of splendour came in the early nineteenth century when it became the trading centre of the Canaries, with hundreds of ships anchoring offshore. During the Napoleonic wars, the majority were American as the United States remained neutral.
This illusory moment was followed by deep crisis.
People emigrated en masse, wine production collapsed because of plagues and Puerto de la Cruz was relegated to the status of a minor trading centre.

A variety of uses 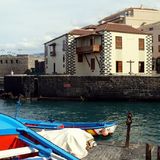 The Casa de la Aduana has been put to a variety of uses. It was originally used to ensure the compliance of rules and regulations of passage; but this was not its only fate. It also housed the British Consulate.
The Casa shared the most passionate moments in the local history of Puerto de la Cruz, featuring at the centre of festivities, political conspiracy, dubious commercial transactions, games, social affairs and gatherings, concerts and scandalous elopements involving ladies of high society.
Its balconies and windows were privy to numerous acts and events beyond its walls, and it eventually became one of the most original specimens of domestic architecture in the Canaries.
A new economic model emerged in Puerto de la Cruz: tourism. This activity had sprouted in the shadow of commercial activity since the early nineteenth century. It gradually transformed the town, but, unfortunately, very little of the magnificent architectural legacy of those times remains.
The Casa de la Aduana survived this metamorphosis thanks to the Baillon family, who purchased it in 1963 to use as their home, opening one part to the public.

The Battery of St. Barbara 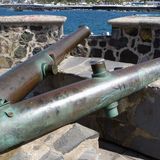 The presence of pirates and corsairs, particularly in the late sixteenth and mid-nineteenth centuries, required the most strategic points along the coastline of the Canary Islands to be fortified.
The Battery of St. Barbara is one of the oldest in Puerto de la Cruz.  Dating from the seventeenth century, it was extended and renovated in 1741. This semi-circular building had a palisade, a sentry box and a storehouse used as a magazine, adjacent to the back wall of the Casa de la Aduana. Its mission was to defend ships anchored offshore from pirate attacks. It was equipped with four 12-gauge cannons, two of iron and two of bronze, the latter bearing the arms of Portugal and Holland, since they came from a Dutch vessel that had been delivered to Luis de Córdoba, Captain General of the island.
The rooms of the Casa de la Aduana closest to the battery served as lodgings for the local commander. After being refurbished, the house had two entrances which were connected by a central courtyard: one for the military area (near the emplacement on the quay), and a main entrance for civilians on the façade overlooking calle de Las Lonjas.
In 1810, the area shared by the house and the battery witnessed one of the darkest events in local history—the French Mutiny. The final outcome was the cruel lynching of two pacific Frenchmen, residents of Puerto de la Cruz, who were accused of collaborating with Napoleonic troops, at that time at war with the Spanish in the War of Independence.
The battery was dismantled by Royal Decree of 25th July 1878, and in 1924, it was declared unsuitable for army requirements. Eventually, Mayor Melchor Luz ordered its demolition to make way for lorries conveying fruit to the quay. 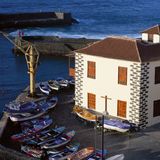 The former battery emplacement was often used as an improvised shipyard where many inshore fishing vessels were constructed or repaired. All that remains today as a testament to the town’s past are the walls on the sea edge and the steps gaining access to them. 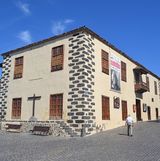 Attached to the Casa de la Aduana is La Carola Cross. This is the oldest known cross in Puerto de la Cruz, and perhaps the first. It certainly marked the Christianisation of the town and gave it its name.
Located next to the steps formerly used by passengers to pass through passport control and the customs,  it has two shrouds, the oldest of which is placed on the cross of the neighbouring Casa Miranda. The other was made from cloth and thread brought from London.
This enormous octagonal-section cross (243 x 205 cm, width 15 x 15 cm) is the last one seen by sailors as they put to sea. 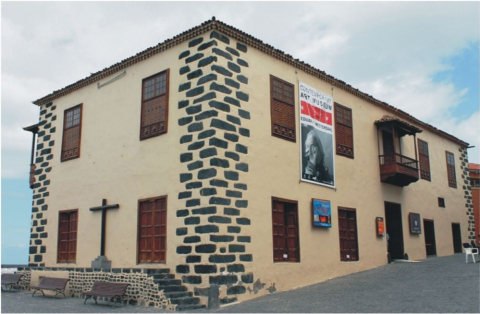