The church inherits its name from an original church built in the same place at the beginning of the 16th century, which underwent a series of alterations, finishing in the 18th century.

There are two doors with semicircular arches and heart wood gargoyles in the main facade. The three naves are separated by smooth timber pillars resting on cubic bases. The tower was built at the end of the 17th century, by Domingo Rodríguez Rivero. There is a Canary Island balcony on one side.

The interior is a real museum, especially with regard to paintings. The semicircular Baroque reredos in the chancel deserves a special mention. It has Salomonic pillars ending in Corinthian capitals. It is a single piece, made in 1774 by brothers Andrés and José Rodríguez Suárez.

The niche of the reredos houses the present figure of Santa Catalina de Alejandría, 18th century, a fine work in coloured wood, by  Luján Pérez. This is the third figure the church has had; the first one is still kept, carved in stone.

Another magnificent Baroque reredos is the one in the Carmen Chapel (1688) in the right hand nave, with a fine figure of la Virgen del Carmen, a remarkable work by Luján Pérez, carved in cedar. The chapel's canvasses are supposedly by Gaspar de Quevedo.

The Concepción chapel, to the left of the presbytery, was the head of the church until 1664. The side wall holds six large oil paintings, including Desponsorios de la Virgen, allegedly by Cristobal Hernández de Quintana, and La Anunciación by Gaspar de Quevedo. Other interesting reredos are the Rosario one, with its harmonious decoration of flowers, fruit and angels, and the Las Animas reredos, with a valuable picture of Las Animas by C.H. de Quintana. Silver work includes a magnificent monstrance from the workshops of Puebla de Los Angeles, donated from Mexico by Andrés Alvarez. There is also an 18th century tooled silver shrine.

The tree-lined Plaza del Cristo is dominated by the church of El Cristo de los Dolores and the former convent of the Augustine fathers that now houses the Cultural Centre.

It was built in 1664, with a lovely facade to the church del Cristo de los Dolores, Patron Saint of Tacoronte, with two gargoyles that resemble fantastic dragons. The work by Domingo Rodríguez Rivero in stone has a crest of arms of the Pereyra de Castro family over the door. Of Portuguese origin, they used to be the patrons of the church. The kneeling statue of the church's founder, Tomás Pereyra de Castro y Ayala, is in the chancel. He brought the figure of Christ that can be seen in the reredos, to the island.

The church has three naves with high arches of local stone. Precious metal work in the chancel includes the front of the altar and the tabernacle, excellent work by Canary Islander Juan Donminguez, done in the second half of the 18th century. 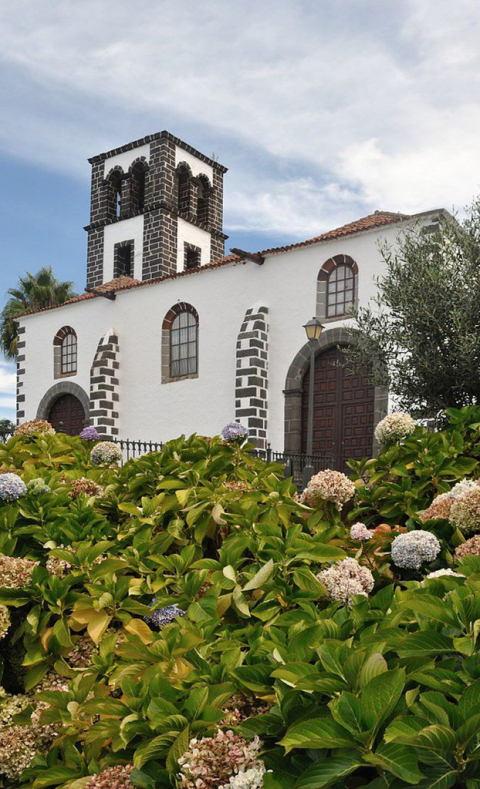