On the coast, the Montaña Amarilla natural area is an interesting example of hydromagmatic vulcanism. That is to say, a volcanic structure resulting from a magmatic centre below shallow waters that heats up the water table. This leads to an explosive eruption that forms a volcanic construction known as a tuff-cone.

The erosive effect of the sea has created a thirty-metre high cliff that enables us to see the internal structure of the edifice. Down by the sea, there is a startling example of fossil dune, formed by the deposits of organogenic sands.

Roque de Jama, a phonolythic tor or dome that was formed below the surface and which has been exposed by erosion, lies between San Miguel and the neighbouring borough of Arona. It is the largest of these volcanic structures on the island.

There are also other areas with natural attractions, such as Montaña Tilena, part of the Orchilla Ravine, the many volcanic cones and lava flows, etc. 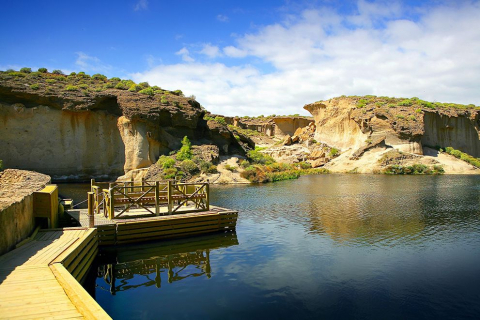